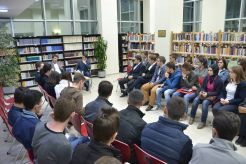 Idlir Peçi: Quality in legal education, the basis for justice reform In the context of the sessions "Brownbag Seminars" Deputy Minister of Law Mr. Idlir Peci was invited by the student club "Bedër Law Academy" in an open lecture where he shared his views with students and participants about "The Reform in Law".

Deputy Minister during the presentation of the current progress of the reform and the institutions participating in it said "The reform in law is one of the most important challenges that require continuous commitment of all the actors".

Among other things Mr. Peci said that to reform the structures on law does not necessarily require to change individuals, but to change the whole system, starting from juridical education which is the basis of the progress of legal relations of social and to further continue institutional changes. At the same time, Mr. Peci praised School of Magistrates as one of the model institutions in the country by mentioning the quality it guarantees and that scientific research was recently added.

The activity continued with numerous questions by attendees where even the reform in the prison system in Albania was not left out and proceeded with Deputy Minister sharing numerous professional experiences with students.