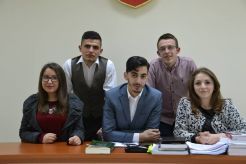 Jessup International Competition, under ILSA's management joins law students from across the globe. Now in its 56's year, Jessup is the largest international competition in the world for law students, with participants from more than 600 universities worldwide.

For the second consecutive year, HEI “Hëna e plotë” Bedër has set upa team of qualified students of international law that will enable the representation of Albania for the third time in the history of Jessup.

The competition simulates a case in the International Court of Justice (ICJ), the principal judicial organ of the United Nations. Since September 2014 the team has studied the issue of litigation in Jessup, of which addresses the effect of a fundamental change of circumstances of a bilateral treaty and the procedural and substantive issues arising by the annexing of the territory of one nation to another.

The team has researched and developed the core arguments orally to represent each side of the imaginary dispute.

The team represented by students: Mandrit Kamolli, Emira Shkreta, Emsal Ajredini, Eduart Gjoni and Albi Cela traveled to Washington to submit presentations in a race head to head with their counterparts, students from around the world.