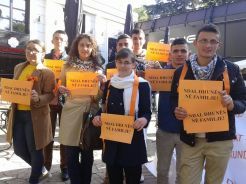 "From boys and men, against violence on women and girls" was the documentary organized by Gender Alliance for Development Center in cinema "Millennium".

A discussion panel was held during the show where different personalities referred, such as US Deputy Ambassador in Tirana, Deputy Minister of Education, Deputy Minister of the Ministry of Youth and Social Welfare and Head of the Counseling Line for Women and Girls.

"Beder Law Academy" Club by participating in this event opened the way to activities within days of society awareness about the elimination of violence against women.

this club will organize a series of activities focusing on different themes starting from 25 November, International Day for the Elimination of Violence Against Women until December 10 Day of Human Rights at the same time.

The diversity of these activities consists on raising awareness of students and society about the violence against women being a phenomenon that must be fought until the complete disappearance of it from our society.